To arms, to arms, ye brave!
Th'avenging sword unsheathe!
March on! march on!
All hearts resolved on victory or death.


» On 7/11/2004 07:01:00 AM Mountain Standard Time, Anikó wrote:
Blue moons, lavender suns and noctilucent clouds. The month of July 2004 has two full moons, which means one of them is a Blue Moon. But will it really be blue? Believe it or not, scientists say blue-colored moons are real. [more]
» On 7/11/2004 07:00:00 AM Mountain Standard Time, Alan wrote:
Barcelona, by Whit Stillman: "You see, that's one of the great things about getting involved with someone from another country - you can't take it personally. What's really terrific is that when we act in ways which might objectively seem asshole-ish or incredibly annoying, they don't get upset at all, they don't take it personally, they just assume it's some national characteristic."

» On 7/09/2004 07:00:00 AM Mountain Standard Time, Alan wrote:
Get More. We finally bought a camera phone three days ago. Our eventual plan is to begin posting on the Internet some blurry photos of the daily events in our insignificant lives (within seconds of their occurrence) to thoroughly bore all and sundry with the yawning pointlessness of our humdrum existence.
» On 7/05/2004 07:00:00 AM Mountain Standard Time, Alan wrote: 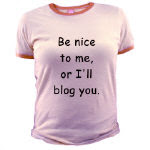 The t-shirt has finally arrived.

Let 'em know what they're up against.

» On 7/04/2004 07:00:00 AM Mountain Standard Time, Alan wrote:
Erotic-Horror Screenplay Discovered On Office Printer (The Onion): "Even though I can see Tony getting into the ancient sexual rites of the Celtic goddess Agrona and the lust of Count Drakul, all the lesbian sex points to an author who's straight."
» On 7/01/2004 07:00:00 AM Mountain Standard Time, Alan wrote:
Scuttlebutt comes from scuttle, "a small opening" + butt, "a large cask" — that is, a small hole cut into a cask or barrel to allow individual cups of water to be drawn out. The modern equivalent of this old nautical object is the office water cooler, also a source of refreshment and gossip.

As you may have heard, I was fired two weeks ago. And yes, I'm trying to put this extremely traumatic episode behind me, because I'd rather not dwell on it. After all, this is the same company that used to single me out for cash awards to honor my contributions to their productivity. And this is also the same boss I once called "my hero" during her brave struggle with cancer.

But the rumors from my old workplace are even more disturbing. You might think, "Okay, they've fired the office troublemaker. If they're smart, they'll talk with his boss, just to make sure his allegations of abuse are untrue, and they'll caution her against any future improprieties. Then they'll have a general meeting to calm everybody's nerves, and get 'em back on track."

However, the boss is still attacking her employees, and the meeting's substantive theme was: "Big Brother Is Watching, So Don't You Dare Complain About How This Place Is Being Run."

Management by intimidation is becoming much too popular these days.

I used to work in a great environment, with a talented array of colleagues; this was a department which basically ran itself during the recent two-week absence of its supervisor. We were all willing to help each other, and we'd make games out of finding innovative ways to meet impossible deadlines.

But now it's a snakepit. Everyone's a snitch, and nobody is particularly concerned about doing good work, because they're too busy covering their own asses. This makes me unutterably sad.

Intellectually, I understand the concept of a Sacrificial Lamb. When a company chooses a new supervisor, spending lots of time and money to train her, they naturally want to protect their investment. And if some loudmouth comes along who threatens that investment, they desperately need to believe the problem is with the loudmouth, not with the supervisor.

But this incident cost me my livelihood.

Think about that for just one more second: at the age of 53, my life was blown completely apart, with no warning.

So if you're going to make me into a Sacrificial Lamb, you'd better be damn sure my sacrifice counts for something.