» On 7/30/2005 08:00:00 AM Mountain Standard Time, Alan wrote:
"10th Planet" Discovered. If the last planet was Pluto, I think this one should definitely be named Goofy. [Later: Ellen Meister replied, "Goofy's a good name for a planet, but nothing can beat Uranus."]

Two other articles really show how much further ahead Brown's team was - they knew about 2003 EL61's moon and diameter, and they also knew that 2003 UB313 was bigger than Pluto. Those Spaniards tried to pull a fast one, but ended up with egg on their faces.

» On 7/28/2005 08:00:00 AM Mountain Standard Time, Alan wrote:
BookCrossing.com. The website says: FREE YOUR BOOKS! It sounds like a worthwhile activity, and we've been meaning to try out this pay-it-forward program for quite some time. So we finally released our first book yesterday... and somebody's already reading it!
» On 7/27/2005 11:00:00 AM Mountain Standard Time, Anikó wrote:
Indio Gothic: Using our camera's self-timer, we just photographed this literary homage to Grant Wood. [The giant pencil came from a Think Big store.]
» On 7/18/2005 08:00:00 AM Mountain Standard Time, Alan wrote:
Rudyard Kipling (1865-1936) wrote a short story, The Man Who Would Be King, in 1889. John Huston, Sean Connery, Michael Caine and Christopher Plummer made the story into a movie in 1975. Last night, I watched the film again. It's f*cking great.

In 1909, two years after winning the Nobel, Kipling wrote a poem entitled "If". In 1969, Thaddeus Dulski made me recite the poem from memory in front of his class. It seemed like cruel and unusual torture at the time, and I can't recall the entire poem now, but I still fondly remember my Senior English teacher. So... thanks, Mr. Dulski:

If you can keep your head when all about you
Are losing theirs and blaming it on you;
If you can trust yourself when all men doubt you,
But make allowance for their doubting too;
If you can wait and not be tired by waiting,
Or, being lied about, don't deal in lies,
Or, being hated, don't give way to hating,
And yet don't look too good, nor talk too wise;

If you can dream - and not make dreams your master;
If you can think - and not make thoughts your aim;
If you can meet with Triumph and Disaster
And treat those two imposters just the same;
If you can bear to hear the truth you've spoken
Twisted by knaves to make a trap for fools,
Or watch the things you gave your life to broken,
And stoop and build 'em up with worn-out tools;

If you can make one heap of all your winnings
And risk it on one turn of pitch-and-toss,
And lose, and start again at your beginnings
And never breath a word about your loss;
If you can force your heart and nerve and sinew
To serve your turn long after they are gone,
And so hold on when there is nothing in you
Except the Will which says to them: "Hold on";

If you can talk with crowds and keep your virtue,
Or walk with kings - nor lose the common touch;
If neither foes nor loving friends can hurt you;
If all men count with you, but none too much;
If you can fill the unforgiving minute
With sixty seconds' worth of distance run -
Yours is the Earth and everything that's in it,
And - which is more - you'll be a Man my son!

» On 7/17/2005 08:00:00 AM Mountain Standard Time, Anikó wrote:
♫ Der er et yndigt land. Denmark is one of only two countries (New Zealand being the other) which has a pair of officially-recognized national anthems. To celebrate the country itself, Danes sing "Der er et yndigt land" (I Know a Lovely Land). The lyrics were written by Danish poet Adam Oehlenschläger c. 1819, with music by Hans Ernst Krøyer c. 1835. It has been used as a national anthem since 1844.

"Kong Kristian" (King Christian Stood by the Tow'ring Mast) is also a national anthem but is used mostly in connection with the Danish royal family. It's heard at state and naval visits, military sports venues, and events where a member of a foreign and/or the Danish government is present. The lyrics first appeared in Johannes Ewald's historical drama "The Fishermen" in 1779, and the melody was given its final shape by Daniel Friedrich Rudolf Kuhlau c. 1817. The royal anthem is one of the oldest in the world, adopted in 1780.

Translations courtesy of the Danish Embassy.

» On 7/16/2005 08:00:00 AM Mountain Standard Time, Alan wrote:
♫ Himnusz. The title of the Hungarian national anthem is often given as the first line of the song, "Isten, áldd meg a magyart," but the current title is simply "Himnusz," which means "Hymn" or "Anthem" in English. It has a subtitle: "A magyar nép zivataros századaiból" which roughly translates as "From the stormy past of the Hungarian people." The subtitle was originally part of the title: "Himnusz a magyar nép zivataros századaiból." Ferenc Kölcsey, who wrote this poem in 1823, sets his text in the 17th century when Hungary was torn into three parts: the independent Hungarian principality of Transylvania, the Turkish-occupied central Hungary, and the remaining Austrian royal (Habsburg) areas in the north and west. The anthem was adopted in 1844, even while Hungary was still a part of the Austro-Hungarian Empire. [Music: Ferenc Erkel.]

» On 7/15/2005 08:00:00 AM Mountain Standard Time, Anikó wrote:
♫ The Star-Spangled Banner. During the War of 1812, on September 13, 1814, Francis Scott Key visited the British fleet in Chesapeake Bay to negotiate the release of Dr. William Beanes, who had been captured after the burning of Washington DC. The release was secured, but Key was detained on ship overnight during the shelling of Fort McHenry, one of the forts defending Baltimore. In the morning, he was so delighted to see the American flag still flying over the fort that he began a poem to commemorate the occasion. Entitled "The Star-Spangled Banner," the poem soon attained wide popularity, as sung to the tune "To Anacreon in Heaven." The origin of this tune is obscure, but it may have been written by John Stafford Smith, a British composer born in 1750. In 1916, President Woodrow Wilson ordered The Star-Spangled Banner played at Army and Navy occasions, but was not designated the U.S. national anthem by an Act of Congress until 1931. It consists of four verses, but on almost every occasion, only the first verse is sung:

Oh! say, can you see, by the dawn's early light
What so proudly we hailed at the twilight's last gleaming?
Whose broad stripes and bright stars, thru the perilous fight,
O'er the ramparts we watched were so gallantly streaming?
And the rocket's red glare, the bombs bursting in air,
Gave proof thru the night that our flag was still there.
Oh! say, does that Star-Spangled Banner yet wave
O'er the land of the free and the home of the brave?

On the shore, dimly seen through the mists of the deep,
Where the foe's haughty host in dread silence reposes,
What is that which the breeze, o'er the towering steep,
As it fitfully blows, half conceals, half discloses?
Now it catches the gleam of the morning's first beam,
In full glory reflected, now shines in the stream.
'Tis the Star-Spangled Banner! Oh! long may it wave
O'er the land of the free and the home of the brave!

And where is that band who so vauntingly swore
That the havoc of war and the battle's confusion
A home and a country should leave us no more?
Their blood has washed out their foul footstep's pollution.
No refuge could save the hireling and slave
From the terror of flight or the gloom of the grave.
And the Star-Spangled Banner in triumph doth wave
O'er the land of the free and the home of the brave.

Oh! thus be it ever when freemen shall stand
Between their lov'd home and the war's desolation,
Blest with vict'ry and peace, may the heav'n-rescued land
Praise the power that hath made and preserved us a nation.
Then conquer we must, when our cause it is just,
And this be our motto - "In God is our trust."
And the Star-Spangled Banner in triumph shall wave
O'er the land of the free and the home of the brave.

Last year, I posted only the first verse. This year, let's take a look at the whole thing (below)... along with some other national anthems (during the coming week).

Translation by Pierre Gay. UPDATE: Bastille Day.
» On 7/13/2005 08:00:00 AM Mountain Standard Time, Alan wrote:
Blindsided. My sister-in-law has just reported that an interview Anikó supposedly gave to the Hungarian version of People or Us magazines was instead published in the latest issue of a tabloid newspaper National-Enquirer-wannabe [WARNING: occasional nudity]. They also printed a bunch of unauthorized family photos. We probably deserve this for trusting Kata Szigeti, a writer whose work we hadn't seen, but I'll never forgive that slimy bitch for dragging my stepchildren into the muck.
» On 7/11/2005 08:00:00 AM Mountain Standard Time, Alan wrote:
Hey, we're in an Emmy®-nominated TV show!

Well, it's only a local Emmy®, and our appearances in "The Inside Pitch" are pretty darn minimal—I have one measly line (during the credits), and Anikó has just a short cameo—but still... [Announcement, Gala, Screencap#2. Clip. DVD. Amazon, IMDb] 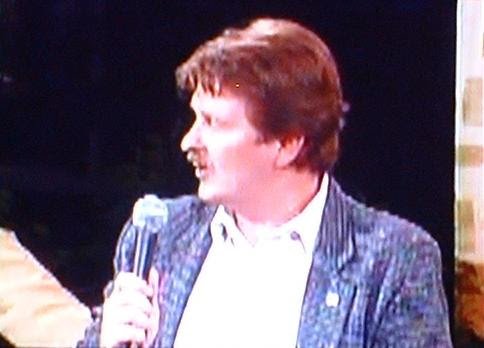 Updates: the beleaguered plutocrat prez sez, in effect, "Some of my best friends are..." Wonder how he'd feel about bringing back the old Taco Bell logo?