See what Facebook's home page looked like in the early days (as Thefacebook.com):

Click the "about" link for a chuckle. Then, in August 2005, they took over the Facebook.com domain:

(The October 2006 update shows when they stopped limiting membership to students.)

SCOTTSDALE, Arizona, Oct 22. It's a big day for Microsoft: the company opened its first retail store in Scottsdale Fashion Square this morning, to coincide with the launch of Windows 7. Microsoft gave away gift bags to the first thousand store visitors and offered other incentives to spark early traffic, including free tickets to a 5PM concert by actress/singer Ashley Tisdale ("High School Musical"). The store is located on the first floor [pic] of an upscale mall in this affluent Phoenix suburb, 7 miles away from the nearest Apple retail outlet.

9-year-old Ashley (no relation to the singer) and her mom [pic] arrived at 11PM last night, to secure their places in line for the grand opening. Ashley has been a fan of her namesake since Tisdale's role on the Disney TV series "The Suite Life of Zack & Cody." After picking up their free concert tickets and goodie bags, mother and daughter planned to head back home to Queen Creek to rest up for the late-afternoon concert.

Mike Shahin of East Mesa had been waiting in line since midnight, because he wanted to be one of the first to buy a copy of Windows 7. Alan Ace [pic] felt the same way; he's been using Microsoft products since 1985, starting with DOS. Alan arrived at 4:30 this morning to join the growing queue, and said the main influx of people began showing up at 6:30AM.

Singer Justin Bieber is scheduled to perform at the opening of Microsoft's second retail store next week in a Mission Viejo, California mall that already contains an Apple Store.

Gorgeous images of our other home city, along with some cool music and a surprising look at Hungarian inventions and developments that have rocked the world, like: ballpoint pens, binoculars, helicopters, holography, computers, and the Ford Model T.

Music by A. R. Rahman, lyrics by Gulzar.

The song is written mostly in Hindi, Urdu and Punjabi, interspersed with some Spanish words.

(After watching Slumdog Millionaire, we couldn't get that closing-credits dance track out of our heads.)

GOING-TOO-FAR UPDATE: One of the pre-show favorites, Alexandra Horvath, was forced to withdraw from the contest after her surgically-enlarged breasts caused her to fall right over and tear a ligament. [another gallery] 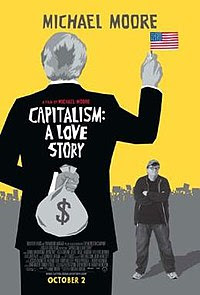 Yesterday, we went to see Michael Moore's new film, "Capitalism: A Love Story." It's a wonderfully clear explanation of a very complex subject: the evils of our economic system. Anikó and I were both surprised and gratified to hear the long round of applause from the audience at the end of the movie.

Moore always digs up some fascinating footage - perhaps the most valuable in this film was a portion of Franklin D. Roosevelt's State of the Union Address from January 11, 1944 (the Second Bill of Rights or "economic bill of rights"). We tried to imagine what our country could have become, if FDR had lived long enough to implement his plan:

We have come to a clear realization of the fact that true individual freedom cannot exist without economic security and independence. "Necessitous men are not free men." People who are hungry and out of a job are the stuff of which dictatorships are made.

In our day these economic truths have become accepted as self-evident. We have accepted, so to speak, a second Bill of Rights under which a new basis of security and prosperity can be established for all - regardless of station, race, or creed.

The right to a useful and remunerative job in the industries or shops or farms or mines of the Nation;

The right to earn enough to provide adequate food and clothing and recreation;

The right of every farmer to raise and sell his products at a return which will give him and his family a decent living;

The right of every businessman, large and small, to trade in an atmosphere of freedom from unfair competition and domination by monopolies at home or abroad;

The right of every family to a decent home;

The right to adequate medical care and the opportunity to achieve and enjoy good health;

The right to adequate protection from the economic fears of old age, sickness, accident, and unemployment;

The right to a good education. 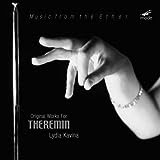 From Amazon.com: The theremin may be one of the oddest instruments ever invented: the electronic device's high-pitched sound resembles no other--and you never even touch it to play it. It's become familiar from that novel Beach Boys solo on "Good Vibrations" and the occasional sci-fi score sound bite, but it's seldom thought of as the serious instrument its inventor Leon Theremin wanted it to be. This recording, like the must-have Clara Rockmore disc, The Art of the Theremin, attempts to change that. Lydia Kavina might very well be the best thereminist playing today; she's the inventor's last protégée (as well as being the granddaughter of his cousin) and her range on the instrument is unparalleled. Here, she tackles the body of work made specifically for the instrument from the likes of Joseph Schillinger, Bohuslav Martinu, Percy Grainger, Isidor Achron, and a handful of contemporary composers. Grainger's "Free Music #1" for four theremins eerily defies the bounds of written composition (Kavina plays all four theremin roles); Kavina's own Suite is an impressive showpiece of the instrument's range; and Vladimir Komarov's tape-and-theremin piece "Voice of Theremin" is built entirely of passages from the instrument and the voice of Theremin himself, all processed through a computer with stunning results. Martinu's Fantasia for Theremin, Oboe, Piano, and Strings is the disc's real charm: a 14-minute composition with plenty of oboe-theremin interplay and lovely string passages from the Portland String Quartet. 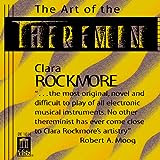 From Amazon.com: In 1927, two remarkable people arrived in the United States after lengthy and successful tours of Europe: Lev Sergeivitch Termen (anglicized to Leon Theremin) and Clara Rockmore (whose maiden name was Clara Reisenberg). Theremin was a young Russian physicist who was demonstrating a new musical instrument that he invented. The instrument was played by the motion of the musician's hands in the space surrounding the instrument. Clara Rockmore, a professional violinist from the age of 9, became aware of the musical potential of Theremin's invention. She spent several years collaborating with Theremin during which time he developed his invention into a sensitive, wide-range musical instrument. Clara subsequently embarked on a performance career that encompassed well over a hundred concerts, including appearances with major symphony orchestras, and set the definitive standard for theremin performance technique.

The thereminist must move her hands with incredible precision as well as speed if she wishes to play distinct notes with correct intonation. Ms. Rockmore actually uses fingering patterns to play the most rapid passages. For instance, if she were to play an upward arpeggio, she would start on the lowest note with right hand tilted back and fingers withdrawn. To play the next note she would abruptly move her hand forward from the wrist, while keeping her right arm motionless. The third note would be played by rapidly extending the little finger, and the fourth note by extending one or two more fingers while simultaneously turning the wrist sideways to bring the newly-extended fingers nearer to the pitch antenna. She would then continue the arpeggio by moving her whole arm closer to the pitch antenna while drawing her hand and fingers back, then repeating the above-described succession of movements. At the same time, she may articulate each individual pitch by rapidly shooting the fingers of her left hand into the volume antenna loop, then withdrawing them, to silence the tone during the very short periods of time that her right hand moves from one pitch to another. No other theremin player has ever mastered this difficult and intricate technique for playing rapid successions of precise pitches - "aerial fingering" as one reviewer termed it.

Facebook CEO Mark Zuckerberg is currently #158 on the Forbes 400 Richest Americans list. He's the youngest, at age 25, and he's worth $2 billion. Bastard.

Aaron Sorkin ("The West Wing") has just finished writing a Facebook movie called "The Social Network" (based on Ben Mezrich's Facebook tell-all "The Accidental Billionaires"), and David Fincher ("Fight Club") is currently shooting the script for Columbia Pictures, in and around Harvard. The film stars Jesse Eisenberg, Justin Timberlake and Andrew Garfield. Producers include Scott Rudin and Kevin Spacey. 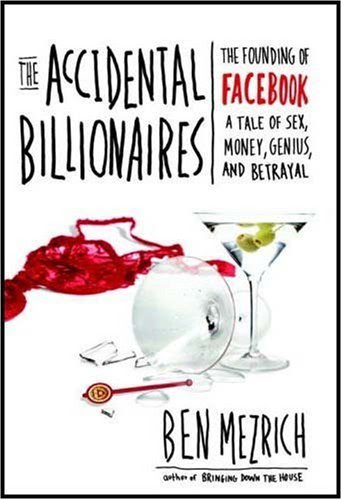 If you ever get a chance to see a glass armonica concert in person, don't miss it. The reverberations will touch your very soul. [video]

From the GlassArmonica.com website created by William Wilde Zeitler:

We've known about the 'wet-finger-around-the-wine-glass' idea since Renaissance times—one of the first people to write about that phenomenon was Galileo. Sets of water-tuned glasses on which you could play music were popularized in England by Pockridge and Gluck in the early 1700's.

In 1761, Benjamin Franklin was in London, representing the Pennsylvania Legislature to Parliament. Franklin was very interested in music: he was a capable amateur musician, attended concerts regularly, and even wrote a string quartet. One of the concerts Franklin attended was by Deleval, a colleague of his in the Royal Academy, who performed on a set of water-tuned wine glasses patterned after Pockridge's instrument. Franklin was enchanted, and determined to invent and build 'a more convenient' arrangement.

Franklin's new invention premiered in early 1762, played by Marianne Davies—a well known musician in London who learned to play Franklin's new invention. Initially Franklin named it the 'glassychord,' but soon settled on 'armonica'—after the Italian word for harmony, "armonia." Apparently, Franklin built a second instrument for Ms. Davies, as she toured Europe with hers, while Franklin returned to Philadelphia with his own.

The armonica made quite a hit, particularly in Germany. Mozart was introduced to it by Franz Mesmer, who used his to 'mesmerize' his patients, and later Mozart wrote two works for it (a solo armonica piece, and a larger quintet for armonica, flute, oboe, viola and cello). Beethoven also wrote a little piece for amonica and narrator, and many of their colleagues of the day composed for it as well—some 200 pieces for armonica (solo, or with other instruments) survive from that era.

But musical fashions changed. Music was moving out of the relatively small aristocratic halls of Mozart's day into the large public concert halls of the 19th century, and without amplification, the armonica simply couldn't be heard. During this period, musical instruments in general were significantly redesigned to make them louder, to be heard in the larger public concert halls—the piano went through a major transformation from a "quiet little harpsichord with hammers" of Mozart's day to the massive instrument we know today, and instruments of the orchestra—strings, winds, brass—were all modified to increase their volume. But there really wasn't any way to make the armonica louder. Concert reviews from the period bemoan the fact that the armonica sounded wonderful—when it could be heard. So, alas, Franklin's marvelous invention was ultimately abandoned.

Amplification is of course no longer a problem, but even today there are only a dozen or so glass armonica performers worldwide.

I intend to win the CFI Blasphemy Contest:

1) God loves you... unless your name is Polanski.

3) The Jesus cartoons made Mohammed laugh his butt off.