The official poster for Aaron Sorkin's new movie is finally out: YOU DON'T GET TO 500 MILLION FRIENDS WITHOUT MAKING A FEW ENEMIES, superimposed over Jesse Eisenberg's face (he plays Facebook founder Mark Zuckerberg in the film).

Kewl. And here's some Facebook stuff you may not know:

-Founder/CEO Mark Zuckerberg became the youngest self-made billionaire in the history of the world at the tender age of 23. He's currently #158 on the Forbes 400 Richest Americans list.

-Author Ben Mezrich (whose bestseller "Bringing Down the House" was made into the movie "21," starring Kevin Spacey, Kate Bosworth & Laurence Fishburne) wrote a juicy tell-all about the founding of Facebook, entitled "The Accidental Billionaires." The movie rights were sold nearly a year before the book was published last summer.

Also, Australian singer Kate Miller-Heidke has written a hilarious tune about old flames on Facebook, entitled "R U F*cking Kidding Me?" The best clip is this rough recording of a live performance. [An old flame sent this link, in response to my Friend request. Later, after I had become thoroughly paranoid, she approved the request.]

My 136-word nonfiction, "Hack," has been chosen as one of the honorees in the Seventh Annual International Ultra-Short Competition sponsored by The Binnacle at The University of Maine at Machias.

The Binnacle is the university's Literary & Arts Journal. They have published the work of writers and artists from all over the world for more than 50 years.

During this competition, they received nearly 900 submissions from 21 countries and 6 continents. They selected 57 pieces, including mine, for publication in their 2010 Ultra-Short edition, which should be ready by mid-October.

PS: Six years ago, Anikó's first publication in English was selected from over 700 submissions as one of 54 pieces to appear in the First Annual Ultra-Short edition.

By October, he had a book deal with HarperCollins.

By November, he had a TV deal with Warner Bros.

By February, he had written the book's final chapter ("Sh*t My Dad Says").

By March, Warner Bros. had hired the "Will & Grace" creative team to help him write the sitcom script, and the pilot, starring William Shatner, had been filmed.

By May, CBS had picked up his show ("$#*! My Dad Says") and HarperCollins had published his book.

By June 11, his book had topped The New York Times' bestseller list.

Two dogs are at the veterinarian's office.

The Poodle complains, "My owner is getting me neutered, just because I hump her leg!"

The Great Dane says, "When my owner got out of the shower yesterday, she leaned over to pick up her towel. That's when nature took over. The next thing I know, I'm mounted on top of her, doing it doggie style. I couldn't help myself."

The Poodle asks, "So you're here to get neutered, too?"

The Great Dane replies, "Oh, no. She's just having my nails trimmed."

He characterizes himself as "America's Toughest Sheriff."

In fact, he prominently features the phrase in the title of his book.

Joe has been champing at the bit, eager to enforce SB1070 (Arizona's new immigration law, that encourages racial profiling) when it goes into effect on July 28.

Several months ago, he was invited to be the keynote speaker at a convention luncheon for guide dog users: http://twitpic.com/1wtwdv

Today, on his 78th birthday, he was uninvited: http://twitpic.com/1wtwmv

He twittered about it: This decision to boycott me from this national convention has ruined my birthday.

And he even wrote up a third-person press release on official MCSO stationery:

So when news came late last week from President Becky Barnes that the National Convention for Guide Dogs Users decided to boot him as keynote speaker in its July Convention at the downtown Sheraton Hotel, Arpaio was as angered as he was hurt. No reason was given in Barnes' emailed retraction but Arpaio said he had "a feeling."

"I suspected the reason had to do with my illegal immigration policies and it turns out I was correct," Arpaio said. "This group says it isn't involved in politics. Well clearly they are. The local group, Arizona Council of the Blind, petitioned the National Board to have me removed, and for what, because they don't want me to enforce Arizona's immigration laws? They are out of step with our citizenry, shame on them."

Many national conventions scheduled to be held in Arizona have resulted in a lot of cancellations since news broke about Arizona's tough stance on illegal immigration. In this case however, instead of the convention boycotting Arizona, the group singled out Sheriff Joe Arpaio personally because of his local and national reputation for enforcing illegal immigration laws.

I'm thinking: This civil servant is 78 years old, WAY past retirement age. And senility often begins with a regression into infantile behavior. Maybe this guy should be put out to pasture, before his tantrums start doing some real damage. Soooo...

Happy birthday, Joe. What goes around, comes around.

Last Chance Harvey was on cable last week. Lovely little film about second chances, late in life. Heartwarming. Funny, poignant script. And it's exciting to watch a couple of Oscar winners (Dustin Hoffman & Emma Thompson) knock it out of the park:

From Wikipedia: According to interviews with Emma Thompson and Dustin Hoffman in An Unconventional Love Story: The Making of Last Chance Harvey, a bonus feature on the DVD release of the film, both had been anxious to work with each other again ever since completing Stranger Than Fiction. When screenwriter/director Joel Hopkins approached her with the script, Thompson suggested he tailor it to accommodate Hoffman, who agreed to portray Harvey if Hopkins would allow his actors the leeway to improvise some of their scenes. Hopkins complied, and several of Harvey and Kate's conversations were ad-libbed while keeping within the dictates of the plot.

Hoffman's wedding toast (can't find a clip of it, unfortunately) is a breathtaking gem. Compare his performance in the completed project with Hopkins' script, and you'll see what I mean. Hoffman improvised most of it, and his work will move you to tears.

Rent the film: Netflix
Or buy it: Amazon

Just a small one.
My jeans had been carelessly thrown onto the bedroom chair.
Evidently he crawled up onto 'em during the night.
Didn't notice him, but now I'm glad he chose "onto" rather than "into."
I pulled on the jeans and sat down to tie my shoes.
Then I walked into the kitchen to pick up my keys.
Anikó asked, "Did you sh*t your pants?"
This woman has a charmingly delicate way with words.
She pointed out a huge wet spot on my butt.
I replied, "Don't think so."
When you get to be my age, you can't rule out things.
Unthinkable things.
Things you youngsters casually dismiss.
So we retraced my steps.
Saw the crushed scorpion on the chair.
My wife freaked.
I was just grateful I hadn't crapped myself.

Originally built in 1926, Grey's pueblo was designed to serve as a haven for his prolific literary efforts, and features extraordinary views of the ocean, as well as the surrounding hills of Catalina Island.

Sometimes, I just need to look at reality from a different perspective. That's when I visit SpaceWeather.com. They always have kewl lynx. Today, I played around with the aurora movies from NOAA POES (National Oceanic and Atmospheric Administration Polar-orbiting Operational Environmental Satellite):

The plots on this page show the current extent and position of the auroral oval at each pole, extrapolated from measurements taken during the most recent polar pass of the NOAA POES satellite.

I also took a look at one of the many movies in the Galleries at NASA STEREO (National Aeronautics and Space Administration Solar TErrestrial RElations Observatory). The Eruptive Trio is an extraordinary little solar flare video clip that will knock your socks off:

As an active region rotated into view, it blew out three relatively small eruptions over about two days (Apr. 30 - May 2) as STEREO (Ahead) observed in extreme UV light. The first one was the largest and exhibited a pronounced twisting motion (shown in the still from May 1, 2010). The plasma, not far above the Sun's surface in these images, is ionized Helium heated to about 60,000 degrees. Note, too, the movement of plasma flowing along magnetic field lines that extend out beyond and loop back into the Sun's surface. Such activity occurs every day and is part of the dynamism of the changing Sun. 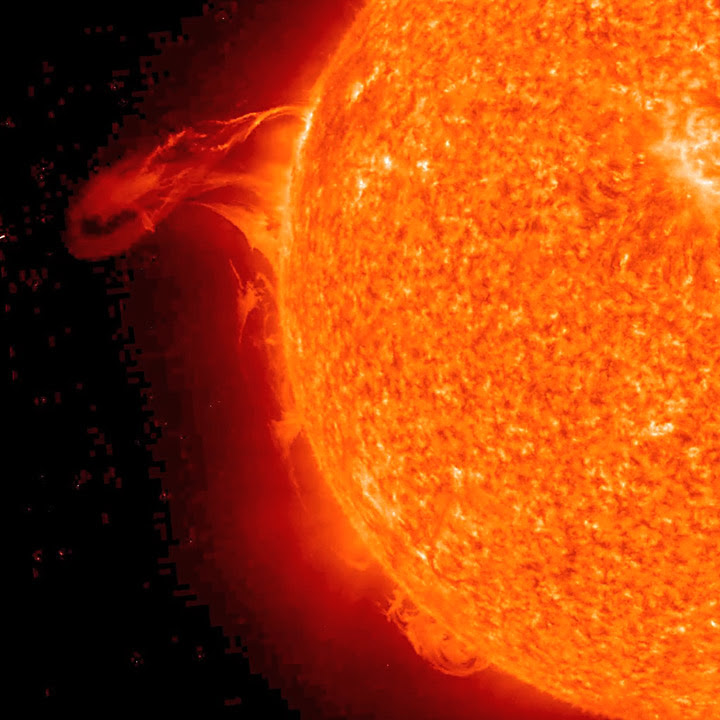 My father would have had a birthday today. If he had lived this long. I still remember him fondly. He taught me a lot of stuff. Like piloting skills. So raise a glass to Ol' Watashi!