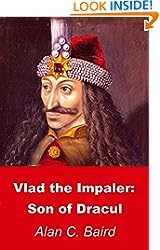 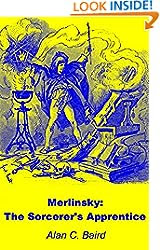 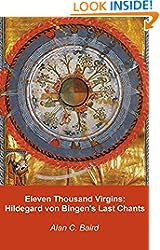 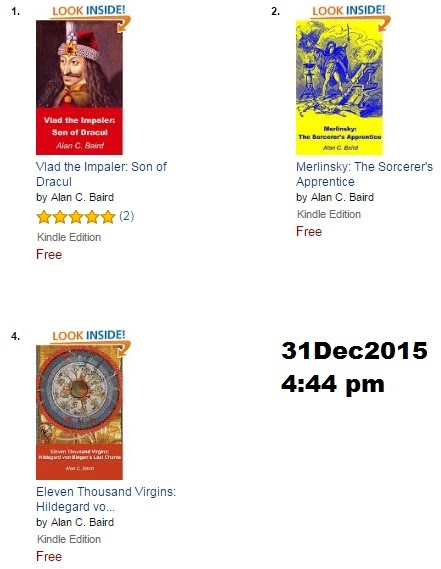 [Warning: humblebrag ahead] Amazon breaks down its Best Sellers rankings into many, many different categories. And those categories are broken down into many, many subcategories. And those subcategories are broken down into eBooks and Dead-Tree books, Paid and Free books, etc. When it comes right down to it, a good chunk of the authors with titles listed on Amazon have a decent shot at getting onto a Best Sellers list. But I'm still delighted that 3 of my free eBooks are currently #1, #2 and #6 on the following list. Merry Christmas!

Some of you may already know that I've been experimenting with publishing free eBooks. Smashwords was an excellent place to start, and they automatically distributed my eBooks to the Barnes & Noble (Nook) and Apple (iBook) stores, among several others. That was extremely helpful, because I wanted to reach as many readers as possible. However, Amazon (which controls approximately 74% of the eBook market) is really picky, so I had to create my own Kindle listings. And Amazon won't let you list your eBook for free ($0.99 minimum), unless you enroll in their KDP Select program:

which pays some money to a few hundred of their top authors, while the millions of other eBook authors earn nothing. Nada. Bupkes.

However, your eBook is not really free to potential readers, unless they subscribe to the Kindle Unlimited (KU) program:

for $9.99 a month. As you can see, this is an amazing deal - for Amazon. They pay out some of their profits to a minuscule percentage of their elite "KDP Select" authors, and let the rest of the unwashed author masses starve. Meanwhile Amazon collects... what?... millions of dollars in KU subscription fees?

I hated this idea. I wanted ALL my readers to have free access to my eBooks, and I finally found a way to get around Amazon's KDP-Select-KU scam:

When Smashwords finally gets my eBook listed at a price of $0.00 at 3 or 4 of the top eBook stores, I report the URLs to Amazon, and challenge them to match prices. They usually lower the price within a day or two - but only at the US Amazon store, not at the 12 other country-specific Amazon stores. Readers who shop at Amazon Japan or Amazon India, for example, have to pay the full 99 cents (or the equivalent in yen, or rupees).

My latest eBook was listed at Smashwords immediately:

, but it contains sexual situations and language, so the Smashwords team has to vet it, before they feel comfortable sending it out to other eBook stores. (BTW, the Smashwords site also offers Kindle, Nook and iBook versions of my eBooks.) So I decided to see if the Smashwords URL was enough to get Amazon to match prices, and received the following reply:

"From time to time, we may match prices elsewhere online, including free promotions. However, we retain discretion over our retail prices and cannot offer a price match in this case."

I thought the wording was pretty high-handed, considering that the AUTHOR sets the price of his/her eBook (as long as it's above the magic $0.99 figure).

So I guess we'll have to wait until the Smashwords team plows their way through my purple prose, and distributes the latest eBook to other stores, so I can club Amazon over the head with several $0.00 URLs. Meanwhile, please don't hesitate to pick up a FREE copy for your Kindle, Nook, iPad or iPhone at Smashwords!

12/24 Update: Amazon finally caved, although they seemed a bit grumpy about it: "While we retain discretion over our retail prices, I've passed your feedback on for consideration."
http://www.amazon.com/dp/B019LWAW2I

Did I mention that it's free?

Description: "Field of Dreams" with medieval chant music in place of baseball.

Pic snapped by Doc Vader and his surgical team, in the middle of my double-eye Lasik procedure: 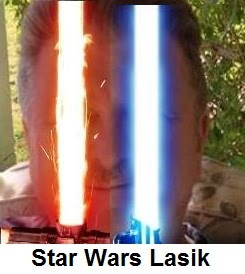 Re: Adding a Star Wars lightsaber to your Facebook profile (Time)

Did I mention that it's free?

Description: Imagine the Lord of the Rings meets Harry Potter and they go back to the future. Based on the Arthurian legend and the ancient folklore myth of the sorcerer's apprentice.

Synopsis: The endless hordes of Hollywood tourists in the late 1940's are easy marks for a con-man magician like Harry Merlinsky. He knows how to sucker the rubes and flash the ol' hamster-outta-the-fedora every now and then, to baffle 'em and dazzle 'em. But he didn't expect a naive fan like Jake, who wants to learn Harry's Old Knowledge - "real" magic. Harry's archenemy obliterates Jake's girlfriend, forcing Jake to become a wizard, just to stay alive. Will Jake use his newfound powers for vengeance? The timeless myth of the Sorcerer's Apprentice unfolds against the backdrop of the Magic Castle and the Hollywoodland sign.

So I wrote to The Powers That Be. Just because that's the way I roll. I enjoy irritating authority figures.

It's in my blood. I'm a sh*t-stirrer, as was my father before me. My father's father was, too, and I'm sure the line of sh*t-stirrers extends way back into the mists of time. Generations of proud sh*t-stirrers, if you will.

In the best-case scenario, The Powers That Be might re-label the maps, and my wife and I could happily live our lives on the Lake Of The Sun, instead of Swamp-Rat Lake. But I figured that was a long shot, and TPTB would probably ignore me.

Boy, was I wrong.

[TPTB had to move 4 signs. And on their maps, the lake to the east is still unnamed.]