My old workplace - a newsroom - offered 10 vacation days per year, but allowed me to schedule only 6 at a time. So in February 2019, my wife and I designed our 6-day May holiday. We paid for the flight, the rental car, and the cottage in the English countryside.

Then, in April, I was fired. After nearly 10 years on the job. No explanation. I was 68 years old. So we said whatthehell, and tacked several days in Wales and London onto the end of our vacation. It was the nicest holiday we've had, in more than 10 years.

When we returned, I got sick and nearly died. I still jokingly tell people that I was probably Patient Zero for the COVID-19 virus. So I cranked out a spec screenplay about my wasted youth, thinking it might be the last thing I ever wrote. The idea had been fermenting in my brain for more than four decades, and I kept putting it off. But it turns out that a brush with death focuses the mind with laser-like clarity and "imminent demise" is a powerful motivation. After the script was converted into a proof-of-concept eBook, it appeared almost immediately on Amazon's Performing Arts Best Sellers list.

So I'm really glad I got fired and nearly died. And I'm especially grateful for that misspent youth. [AIM]

It's also at Amazon:
https://www.amazon.com/dp/B07VKQR7YY

LATER: Amazon was very high-handed when they rejected my price-match request ("We retain discretion over our retail prices") that included link #1, so they received links #2 through 6 in reply:

I'm used to querying American screenplay agents, who very rarely acknowledge that I've contacted them, even after several weeks have passed. So with my new script, I decided to approach British agents as well, and after just THREE DAYS, I've received FOUR lovely rejections, including this one:

"Thank you for submitting Côte d'Azur to us for consideration. Jonathan and his team enjoyed your work, but I’m afraid in the end it fell a bit outside of what he is looking to take on at the moment, and he doesn’t feel best-placed to sell your work in the way it deserves. So he’s going to step aside, and wants to leave the field clear for you to find the right person to represent your screenplay."

Early in this film, young Josh Waitzkin (Max Pomeranc) finds a chess piece in the dirt at Washington Square Park. Vinnie (Laurence Fishburne) offers to trade a baseball for it. In the next scene, Josh takes out a flashlight and examines the chess piece in his bed, before going to sleep. It turns out to be a knight from the Lewis chessmen:

It's surprising that I can't find anything about this on Google.
Somebody in the Props department was obviously on the ball.
So to speak.

LATER: The knight is not even mentioned in the shooting script (PDF p5-9). 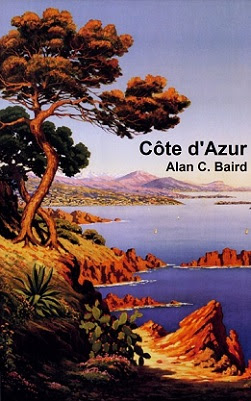 Log line:
"There's nothing quite so romantic as spending one's youth in a foreign land."

You can view the 71pp screenplay PDF here. Yes, it's short. I hate wasting words.

Synopsis:
Eric is a 20-something American guy who's having the time of his life on the French Riviera. Or maybe Eric is the 60-something who's looking back on his earlier years with nostalgia and trying to alter the course of his life. This screenplay was inspired by Lawrence Durrell, and his experiments with metafictional techniques in The Avignon Quintet and The Alexandria Quartet.

So, we fly to London on Thursday, May 16. We settle into our digs, a beautiful cottage near a charming English hamlet, and spend a few days just drinking in the atmosphere and recovering from the jet lag. I might have drunk in a bit too much of the atmosphere, because I started having trouble with the stairs. My knees felt like they had knives stuck inside. Finger joints, too. By the time we began our daily outings into the surrounding countryside, on Monday, May 20, the pain was so bad, I could barely get out of the car. Not fun, but I gamely soldiered on, with just a few breaks for bitching and whining. OK, maybe more than a few.

When we broke camp and headed for Wales, on Saturday, May 25, I was starting to get used to the pain, mild fever, slight cough, headache, f*cked taste buds. I figured this was my introduction to the infirmities of old age, that this was the way it was going to be from now on, and I had better "man up" and stop whining so much. Getting out of the car was still like having nails hammered into my knees, but I learned to cover my reaction to the pain with twenty or thirty short gasping breaths, followed by a quiet whimper.

London on the 28th was a challenge. Most of the stuff we wanted to see was within walking distance, but for me, the 30-minute walk to the British Museum was comparable to the Bataan Death March. So we tried applying liberal quantities of Guinness. It helped. Guinness always helps. But our day trip down to the White Cliffs of Dover, which featured a view of the British end of the Chunnel, was still tinged with a purple haze of pain.

It was a fascinating vacation, but I can't tell you how happy I was, when we climbed onto the plane to return home on Saturday, June 1. During the flight, my left nostril started spewing copious quantities of a clear liquid, and my left ear nearly exploded during landing. There were no improvements by Thursday, June 6, so I figured I was f*cked enough to consult a doctor. She prescribed a Z-Pak (Azithromycin), which I now know triggers a severe allergy (hives), so I ended up being double-f*cked. She said the only thing I could do was pray for death. No, wait, that was me - she said I should treat the respiratory infection as an extreme case of the flu (bed rest, liquids, cough drops) and hope that death came quickly. No, that was me again.

There were many days that I didn't really want to live, because it seemed like nothing was improving. But I have a good wife, who slaps me around (figuratively) when I whine, and she got me past the praying-for-death stage. It's now July 1, and I ain't healthy, by a long shot (the skin on my hands is currently peeling off, like a molting snake), but I'm headed in that direction. Yup, I can finally see the light at the end of the Chunnel. Thanks again for all your good wishes.