BECKET, MA - David C. Canterbury, 58, of 44 Gould Road died Friday at Berkshire Medical Center. He was a former director of the Lee Youth Association for 20 years and a former co-chairman for the Berkshire United Way. Born in Westfield on March 24, 1948, son of Chester E. and Gladys Cherbonneau Canterbury, he was a 1966 graduate of Westfield High School and a 1967 graduate of Cheshire Academy, where he was awarded the Sheridan Plaque as an outstanding scholar and athlete. He was also a 1971 graduate of the University of Massachusetts Amherst and a member of the Amherst chapter of Lambda Chi Alpha fraternity. He lived in Chester for 12 years and moved to Becket seven years ago. Mr. Canterbury was a self-employed fundraising and developing consultant. He also was a former coach and teacher at Westfield and Gateway Regional high schools and at Cheshire Academy. He was a communicant of Our Lady of the Blessed Sacrament Church in Westfield, past president of the Kiwanis Club in Lee. At the time of his death, he was a member of the board of the Lee Library Association. He leaves two sons, Michael D. Canterbury of Chester and Jamie P. Canterbury of Agawam; a brother, Philip J. Canterbury of Columbus, Md.; two sisters, Susan M. Mellen of Tyngsboro and Carol J. Brannan of Eureka, Calif.; two granddaughters; and his companion, Georgia Massucco, with whom he resided. FUNERAL NOTICE - The funeral for David C. Canterbury, who died Friday, Feb. 9, 2007, will be Wednesday at 8:45 a.m. from ROBERT E. CUSAK FUNERAL HOME, 94 Main St. - Route 20, Westfield, with a Mass of Christian Burial at 10 a.m. at the Blessed Sacrament Parish Center on Holyoke Road. Burial will be in St. Mary's Cemetery, all in Westfield. Visiting hours will be tomorrow from 2 to 4 and 6 to 8 p.m. Memorial contributions may be made to the Berkshire United Way, 200 South St., P.O. Box 3808, Pittsfield, MA 01202-3808. He also leaves two granddaughters, Abigail and Chelsea of Chester; three nephews; and a niece. He will be sadly missed. 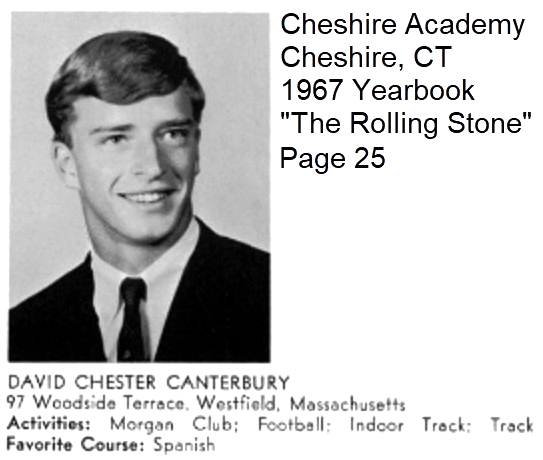 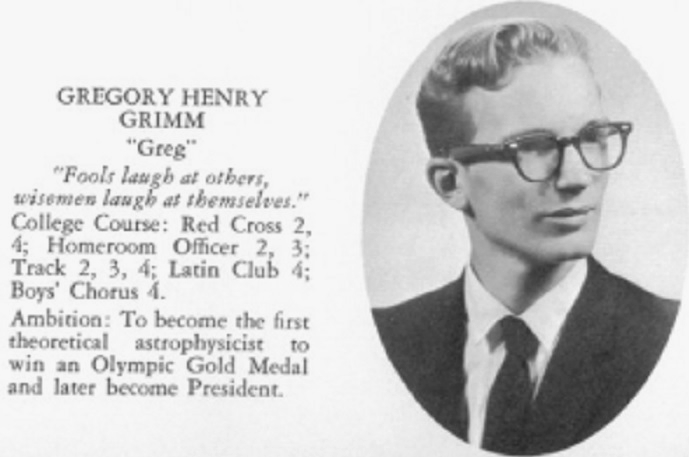 WELLS, ME - Alfred John Laude Jr. of Wells Maine passed away Feb. 8, 2018 with his family by his side after a brief but valiant struggle with cancer surrounded by all the people he loved the most. He was 66 years old. Al was born on May 18, 1951 in Westfield Massachusetts to Alfred John Laude and G. Eleanor Laude (Mesick), the first of five children. Growing up Al was a popular and record-setting athlete in school. He attended Hampden College of Pharmacy. While Al started his career in manufacturing, he later worked in management roles in the Hi Tech industry for Biogen, Digital Equipment Corporation, and Compaq/HP. In 2003, Al decided he was missing too much time with his family by working in the corporate world so together with his wife Joan, opened Alfredo's Italian Pizzeria. He and Joan worked side by side with their children Cara, Nick and Vinny for the next 15 years. He married the love of his life Joan Laude (Flannery) on June 18, 1983, and together they welcomed three children. They enjoyed life to the fullest, always making family their priority and faced all of life's ups and downs as a team. Al's love of family was paramount. Like most of us, Al faced challenges in life. Al always faced his challenges with a plan of action. He beat his struggle with alcoholism by going back to school to become a certified drug and alcohol counselor and completed his career taking care of others at Merrimack River Medical Services. He was a devoted son, brother, husband, father, uncle, grandfather, friend. Al devoted his life to taking care of others, whether it was helping his parents, his community or his family. Care of others and quiet generosity is Al's legacy. Without fanfare, Al would give the last dollar he had to someone who needed it. He leaves behind his beloved wife Joan, as with everything in life they faced the journey as one. In addition he leaves behind his daughter Cara Shaw and his grandchildren Lucas and Natalie, sons Nicholas (fiancé Nicole Ryan) and Alfred Vincent of Wells, Maine, his parents Alfred J. Laude, Sr. and G. Eleanor Laude of Kennebunk, Maine, his brothers David S. Laude (Peggy) of Kennebunk, Maine, their son John and daughter Kate, Paul M. Laude (Sandy) of Greenfield, Massachusetts, children Michael and Christina; sisters, Kathleen Kerr (Ken) of Austin, Texas their children Alex, Greg and David; Margo Emerson (Steve) of Arundel, Maine and their children Stephen and Jack. Services to honor Al will be Saturday, Feb. 17. Visitation will be at St. Mary's Church, Holy Spirit Parish 236 Eldridge Road, Wells, ME 04090 at 10 a.m. followed by a funeral mass at 11 a.m. Everyone is welcome to come and celebrate Al's life at the Wells Activity Center on 113 Sanford Road, Wells, ME from noon to 2 p.m. following the funeral mass. Donations in lieu of flowers may be made to: The Alfred J. Laude, Jr. Athletic Scholarship Fund; 11 Day Hill Road, Wells, ME 04090. 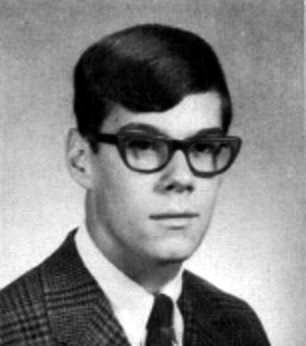 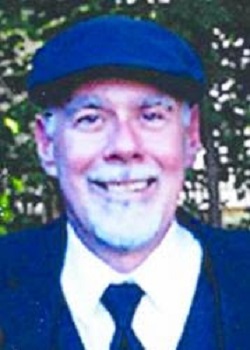 ANDOVER, MA - Robert Andersen, age 93, died peacefully in the loving presence of his five children, their spouses, his youngest brother, a niece, and most of his 15 grandchildren. He served his country proudly in WWII and was a lifelong master craftsman. Rob's 30-year career was teaching high school industrial arts. Even after death, he will teach those who will care for our health, as his body was donated to U.Mass Medical School. We will all miss his sweet face, his quick wit, his humility and affection. However, we take comfort in knowing that Rob has rejoined his lifelong love, Margret, for his last eternal date in the company of angels and the sunshine of our lord. A private service was held in his home with immediate family. Donations in his memory can be made to the following organizations, Alzheimer's Association www.alz.org, St. Labre Indian School, www.stlabreindianschool.org 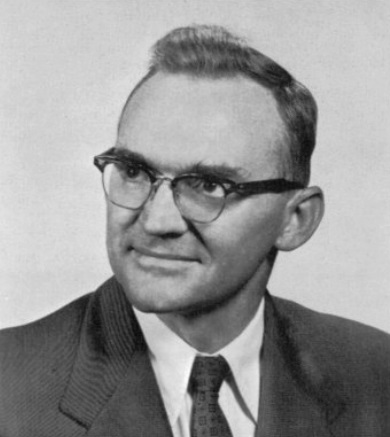 I think we were all hoping for results like this, but the actual numbers are simply astonishing!

We recently traded in two cars and bought a Volvo. Fancy car. Nicest car we've ever owned. Plus, it's a computer on wheels. Everything's automatic. Except the clock. Bizarre. And annoying. So I started tweeting at the company:

1) @volvocars Can your software engineers solve the Arizona clock issue? The only way I can get the correct time in my XC40 is by setting it manually. Your team is aware of this malfunction:
http://volvo.custhelp.com/app/answers/detail/a_id/9546/~/setting-the-clock
"Note: Automatic time may not display the correct time in Arizona."

1r) Replying to @acbaird Hi Alan, unfortunately since Arizona does not have daylight saving time the clock must be adjusted manually.

>>Bzzzzt. Wrong answer, Volvo. Your patronizing condescension has simply pissed me off:

2) @volvocars has 3 dealers in Phoenix, plus 1 more in Tucson, so I assume you sell at least a few cars here in Arizona. And every other company in the world has learned how to adjust for AZ time. Aren't you ashamed to admit your software geeks can't figure out this simple problem?

>>After a couple of hours, I decided that wasn't vicious enough. So my latest tweet includes screengrabs. ;-)

3) @volvocars L: Windows, R: iPhone. Google Maps and Waze are able to display Arizona time, based on GPS data. My Mazda, VW and Toyota could all figure out the correct time from GPS. But my Volvo clock loses THREE MINUTES EVERY MONTH because it must be set manually. Embarrassed yet?

>>You can see that I'm on a holy crusade for oppressed Volvo owners everywhere. ;-) 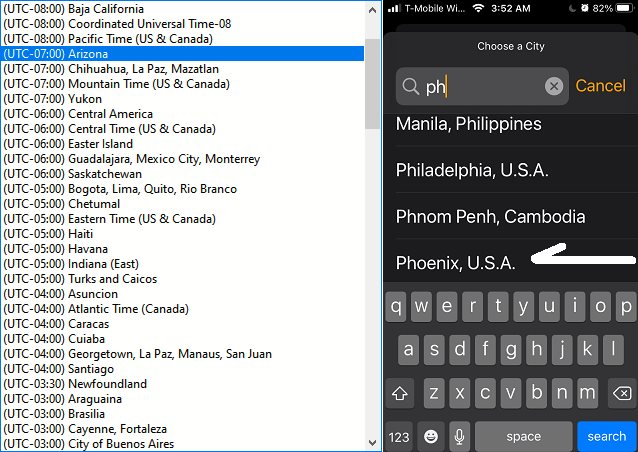 Setting the Volvo Clock in the Good Ol' Arizona Summertime.
Swipe down on the Home screen, tap "Settings" at the top left, tap "System" at the bottom, tap "Date and Time" near the top, tap "Location", tap "U.S. Mountain Time" after scrolling way down near the bottom, tap "Back", uncheck "Auto Daylight Saving Time", uncheck "Auto Time", manually set the Time, tap "Back" and push the "Home" button.
I've discovered that the manual Time setting needs to be updated weekly, in order to keep the clock reasonably accurate. There's a video about this, on Facebook:
https://www.facebook.com/CourtesyVolvo/posts/3098066620236304
NOTE: NONE OF THIS MANUAL WORKAROUND IS NECESSARY. CHEAPER CARS SET THEIR CLOCKS AUTOMATICALLY. A LUXURY CAR LIKE VOLVO SHOULD DO THIS, TOO, BUT THE VOLVO CORPORATION FEELS NO SHAME. The company is treating its Arizona customers like crap. Volvo now has three dealerships in Phoenix and one in Tucson, so they're selling a sh*tload of cars here. But unless every Volvo owner in Arizona complains to his/her dealership, and every AZ dealership complains to company headquarters in Gothenburg, Sweden, the malfunction won't get fixed. The irony is this: Volvo would need to invest only TEN MINUTES of programming time to make things right. (I use three different programming languages, so I know whereof I speak.) Instead, the company arrogantly forces its Arizona customers to perform this useless and frustrating Hokey-Pokey for nearly eight months every year. UPDATE: Many Volvo owners are already complaining about this issue online. Oh, and here too.
LATER: The Tuba Time Warp Challenge. If Volvo programmers can design a car clock that's able to automatically adjust to the correct time(s) for the entire 108 miles between Tuba City and Steamboat Canyon on Arizona Route 264 during Daylight Saving Time, then all is forgiven. ;-)